My email to Richard Perle

Richard Perle, one of the intellectual fathers of the Iraq war, was interviewed this morning on NPR. It was a revealing interview. It showed that nothing has changed. 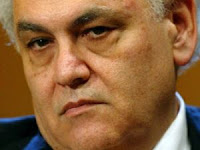 So, I tracked down Perle's email address (rperle@aei.org) and sent him an email.

It's good to see that there is constancy in this world. You are still the evasive, arrogant person you were when you flogged the war in Iraq. Your interview on NPR this morning restored my faith in the belief that you can't expect an old dog to learn anything, not to mention be manly enough to admit mistakes of a fundamental nature. You and your buddies cooked the books and misled the country, all in order to, what, get back at Saddam for humiliating the Bush I White House back in 1991? for trying to take out Bush 1? Of course, if I dug deep enough, I'd probably find evidence that you were supportive of Donnie when he was kissing Saddam's butt during the mid-1980s.

The fact that you and your buddies never even took account of the fact that Saddam was most afraid of the far more powerful country of Shia to the east is sickening. The fact that you and your buddies had no plans for the day after the tanks reached Baghdad is revolting. The fact that you still insouciantly mislead is delightful, because it indicates that if you have a conscience, you are having trouble sleeping at night when you think of the trillions of dollars spent on this folly and the thousands of American children who never knew their fathers, not to mention the bombs ripping human flesh today in the made-up country called "Iraq."

The story that you told today -- that you were searching for a country that could pose a threat to the U.S. after 9/11-- is the biggest whopper yet. Are you kidding?

It reminds me of McNamara's book on Vietnam, where the word "Buddhist" never appears. So, here's some advice: if you are ever in a position of power again, heaven forfend, and you decide to invade another country, this time try to understand the nature of the country's populace and heritage. It might save you some sleepness nights later on when your war proves unwinnable.

I am awaiting a reply.


Posted by The Splendid Spitter at 10:01 AM No comments:

I had forgotten all about Mitt Romney when he and his wife decided to be interviewed on Fox News (where else?) about how it felt to lose the election.

Romney engaged in what he would call letting his hair down and what the rest of us would call a typical calculated attempt to rationalize and avoid reality. Big surprise.

But one of his comments really stood out for his arrogance, in case I had to be reminded.
This was his take on his famous “47 percent” riff:

Yes, it was a very unfortunate statement that I made. It's not what I meant. I didn't express myself as I wished I would have.

You know, when you speak in private, you don't spend as much time thinking about how something could be twisted and distorted and -- and it could come out wrong and be used.

But, you know, I did. And it was very harmful. What I said is not what I believe. Obviously, my whole campaign -- my whole life has been devoted to helping people, all of the people. I care about all the people of the country.

I went back to the transcript of Romney’s remarks to his campaign contributors in Boca Raton to see whether there could be any truth to his claim that he had somehow blurted out some off-the-cuff comments about that he did not really believe.
Here’s the question from someone in the claque of wealthy sycophants audience to which he responded with the 47% statement: “For the last three years, all everybody's been told is, ‘Don't worry, we'll take care of you.’ How are you going to do it, in two months before the elections, to convince everybody you've got to take care of yourself?”
Here’s what Romney said in response:

There are 47 percent of the people who will vote for the president no matter what. All right, there are 47 percent who are with him, who are dependent upon government, who believe that they are victims, who believe that government has a responsibility to care for them, who believe that they are entitled to health care, to food, to housing, to you name it. That that's an entitlement. And the government should give it to them. And they will vote for this president no matter what. And I mean, the president starts off with 48, 49, 48—he starts off with a huge number. These are people who pay no income tax. Forty-seven percent of Americans pay no income tax. So our message of low taxes doesn't connect. And he'll be out there talking about tax cuts for the rich. I mean that's what they sell every four years. And so my job is not to worry about those people—I'll never convince them that they should take personal responsibility and care for their lives.

What I have to do is convince the 5 to 10 percent in the center that are independents that are thoughtful, that look at voting one way or the other depending upon in some cases emotion, whether they like the guy or not, what it looks like.

As could have been expected, the news media went off into a paroxysm of frenzied discussion about whether Romney was in error when he said that 47 of the people pay no income taxes.

That wasn’t the point! The point was that Romney was saying that the people at the bottom half of the economic ladder:

Of course this is what he meant. It may have been stupid to say this. But it came out of his mouth in a direct answer to a direct question in the cozy confines of a campaign event before a claque of wealthy sycophants major campaign contributors.

It represented the height of the kind of arrogance that has characterized country club Republicans since time immemorial. Imagine telling policemen, firemen, Wal Mart stock clerks, assembly line workers, maids, secretaries, nurses, etc., etc., that they are interested only in a handout and will never take personal responsibility and care for their lives! Who says those things but doesn’t "mean" them?

Ann Romney cried crocodile tears during the Fox interview about her husband’s having been the victim of media bias: "But it was not just the campaign's fault. I believe it was the media's fault as well. . . He was not being given a fair shake, that people weren't allowed to really see him for who he was."

Mrs. Romney, I am sure you love Mitt and I wish you well. But let's face it. In perhaps the only unscripted moment in his entire life, Mitt Romney showed himself for who he is.
Posted by The Splendid Spitter at 7:00 PM 1 comment: