Wishin' and hopin' and thinkin' and prayin'

The Singapore Summit is over. Who won and who lost?

Most important for both, Trump and Kim got their photo op: 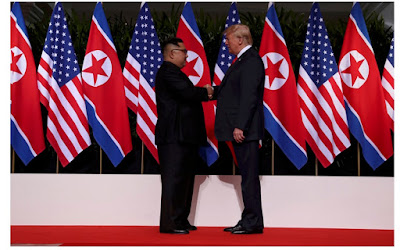 Trump took care of his base, railing before the summit against the (always) unidentified "haters and losers."

And, after the summit, he managed to fawn all over Kim and even to call Chinese dictator Xi "a very special person."

But, atmospherics and premature-Nobel-Prizing aside,


What did the United States get and what did North Korea get?

What the U.S. Got

1. An agreement to recover POW/MIA remains and repatriate those already identified.

2. An agreement to "commit to work toward complete denuclearization of the Korean Peninsula."

Comment: a worthy goal, but:
a."work toward": at best, an unenforceable agreement to agree
b. no mention of "irreversibility."
c. removal of U.S. nuclear weapons from S. Korea?
3. An agreement to "join their efforts to build a lasting and stable peace regime on the Korean Peninsula."

4. An agreement to "commit to establish new U.S.–DPRK relations in accordance with the desire of the peoples of the two countries for peace and prosperity."

Comment: a worthy goal, but:
a. what does it mean?
b. how will it be achieved?
c. where does it leave South Korea?
d. do the North Koreans deserve only peace and prosperity?
d. no mention of "freedom" or "liberty"

What North Korea Got

Comment: a "huge" concession by the U.S.
a. These "war games" have served to remind
North Korea of the U.S.' commitment
to defend South Korea, a major U.S. ally.
b. This has been a major North Korean goal for decades.
c. where does it leave South Korea?

The big winners: Kim and his clique.

The next big winners:

Russia, because Trump can't stop scratching that itch and it thrives when the U.S. creates disunity among its allies,

and China (which can now return to trading with North Korea and whose Communist Party chief, Xi, got a nice plug).

Posted by The Splendid Spitter at 6:29 PM No comments: