Article II, Section 4 of the Constitution says that the President can be impeached for "Treason, Bribery, or other high Crimes and Misdemeanors."

The Democrats seem to be stuck in legalisms. First it was whether there was a quid pro quo. Now it's whether Trump was bribing the Ukranian President. Both may be grounds for impeachment, but each requires a knowledge of basic legal principles to determine whether the grounds are valid. And each is inherently debatable, giving Republicans the basis for creating doubts where, really, none should exist.

It is well established that impeachment is not a remedy for criminality alone. Nor is a crime sufficient. If the President was found to have violated a speed limit on federal property, would he be subject to impeachment? No, because even if this were a felony, it would not be a crime that threatens the national welfare, nor is it an act of such self-serving that it casts the most severe doubt on his fitness for office.

The politics of this are actually far simpler and subject to less genuine doubt (or, put differently, less susceptible to being made the subject of confusion among people who do not live, breathe and eat politics, i.e., most people).

President Trump is irritating and embarrassing. In their gut, the broad middle of this country know he is unqualified to be President. They are either looking for--or at least are open to--a rationale for getting rid of him.

That rationale is staring the Democrats in the face but they seem oblivious to it.

The obvious basis for impeachment, one that is not debatable, is that Trump has been guilty of favoring Russia in the major approaches in his foreign policy:


Whether or not this amounts to "treason," it transcends mere disagreements about foreign policy. When a President of the United States consistently supports the foreign policy objectives of a country like Russia, it threatens our national security. There is no question that Trump has done so. If this cannot be a basis for majority support for impeachment, there is more to be afraid of than Trump.

Posted by The Splendid Spitter at 9:32 PM No comments:

Putting AOC on an Equal Footing with Pelosi

News editors like conflict. No surprise in that. The Democrats, to their credit, disagree among themselves. So when fissures appear, editors (and journalists interested in hits and front-page appearances) do backflips.

Just so with the splits among younger and older Democrats, which, because the media generally abhor subtlety because it's too much "in the weeds," they reduce to a personal conflict between Nancy Pelosi and Alexandria Ocasio-Cortez.


So far, the press seems to be putting AOC, as she is known, on an equal footing with Pelosi, which is ridiculous.

The Speaker has a long career of accomplishment in the U.S. House. AOC has been a Member of Congress for a few months, but, while garnering an amazing amount of coverage in major newspapers, that relic of the 19th Century, and less, but still a lot, on cable TV and broadcast news and in online articles, has not demonstrated any clout in the Democratic caucus. Take the recent vote on the original House bill on one of the most highly-followed issue of recent years--the status of undocumented immigrants at the Southern border. The House passed its version of the bill with 227 Democrats voting "yea" and 4 Democrats voting "nay." (4 Democrats were absent.) The four? Members Ocasio-Cortez, Omar, Pressley, and Tlaib. That was the bill Pelosi was talking about when she told Maureen Dowd of The New York Times: “All these people have their public whatever and their Twitter world,” she said. “But they didn’t have any following. They’re four people and that’s how many votes they got.” Yes, a lot more Democrats voted against the Senate bill, which became law, but that vote cost them nothing among the faction of the party that is to the left of the House caucus, and Pelosi did not need them to pass a bill that at least addressed the issue before Congress left town for a recess.

The whole thing causes me to worry about whether this fissure is going to lead the Democrats to a smashing defeat in 2020.

Who is more likely to lead the Democratic Party to a smashing defeat--Nancy Pelosi or "The Squad," as the afore-mentioned four have been calling themselves since right after their election? Let's do something very old-fashioned: look beyond Twitter for real evidence.

If it's fair to assume that people's voting choices are closely correlated to their views on what's important to them, then Democrats would be wise to focus on what's important to their voters. Where does the press come in? They do a basic disservice when they give more prominence to those with views not held by the majority than those views merit. This is not to say that those with non-majority views should be shut out by the media. It is a question of seeing the forest from the trees.

Take a few moments to read the Pew Research Center's Public’s 2019 Priorities: Economy, Health Care, Education and Security All Near Top of List.

Democratic voters may be repelled by the likes of Donald Trump and Jeffrey Epstein, and they may be sympathetic to the rights of minorities and women.  But, being interested mostly in matters that affect them personally, they think that good government (and politics) are not just about the latest Twitter or other hashtag obsession. Rather, they are concerned mostly about "bread and butter" issues--like how they are going to be able to support themselves during retirement and how they and their children are going to be able to support themselves. They also show increasing concern about the state of the environment. 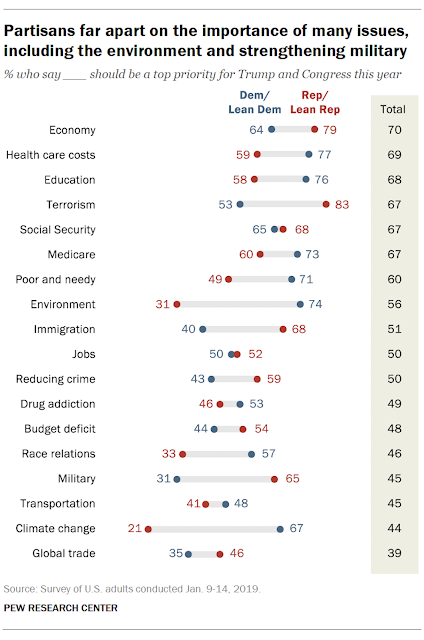 And they are skeptical of "solutions" that are oblivious to political reality. So, by a fairly hefty margin, 53-40, more Democrats want the Party to go in a more moderate direction than in a more liberal direction: 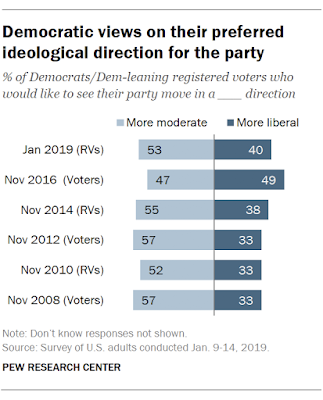 In other words, The Squad is right in there with Donald Trump, with a 40% rating. (Yes, it's a little bit apples and oranges, but the point is undeniable.)

Ultimately, AOC and The Squad will achieve whatever they're going to achieve, but what evidence is there that they are going to be more successful than Occupy Wall Street?

If the press could spend a few moments doing basic research rather than repeating Tweets,  maybe the Republicans and Fox News will have less basis to equate all Democrats with The Squad.

Posted by The Splendid Spitter at 12:57 PM No comments: