If Only Obama Would Automatically...

... have explained to the world that the IRS agents "selecting" "Tea Party" were not selecting Tea Party organizations for audits, but that they were looking for a quick way of identifying organizations that appeared to be political that were inappropriately asking for tax exempt status,

and only then calling the way it was done "outrageous" and saying "I will not tolerate it,"

rather than first explaining (painting the picture) to the American people what actually was done, and only then jumping to the purple, headline-grabbing prose.

If, in fact, IRS personnel engaged in the kind of practices that had been reported on and were intentionally targeting conservative groups, then that's outrageous and there's no place for it.  And they have to be held fully accountable, because the IRS as an independent agency requires absolute integrity, and people have to have confidence that they're applying it in a non-partisan way — applying the laws in a non-partisan way.

The IG is conducting its investigation.  And I am not going to comment on their specific findings prematurely, but I can tell you that if you've got the IRS operating in anything less than a neutral and non-partisan way, then that is outrageous, it is contrary to our traditions.  And people have to be held accountable, and it's got to be fixed.  So we'll wait and see what exactly all the details and the facts are.  But I've got no patience with it.  I will not tolerate it.  And we will make sure that we find out exactly what happened on this.

That kind of unimaginative, overly legalistic response is perfect grist for the GOP mill.

What did anyone learn about what actually occurred from these 248 words? Nothing. Why could he not have said something like this:

Make no mistake about it. I condemn in no uncertain terms what occurred.  But before any one jumps to the wrong conclusion, it is important that the American people know what actually was going on and why it should be condemned.

As far as we know, these IRS personnel were not doing audits of taxpayers or selecting taxpayers for audits.

It was wrong, and, yes, outrageous, for these public servants to do that, because it created a risk that what sounded like right-wing organizations would receive inappropriate level of attention and review. This is bad both because it would tend to treat different organizations differently based on their political beliefs and because it would tend to harm the appearance of lack of political neutrality on behalf of the IRS.

For all of his ability to deliver soaring rhetoric, this President seems completely uninterested in explaining things to the American people -- as opposed to repeating a slogan encompassing the goal he advocates. He rarely did it when he was advocating for his health care plan. It's as if he thinks that his being for or against something is all the people need to know. It's a completely ineffective method of advocacy. Why is it still his modus operandi?

The result is what you could expect by Obama's not defining the issue. The right wing is having a field day and Obama has reverted to radio silence. 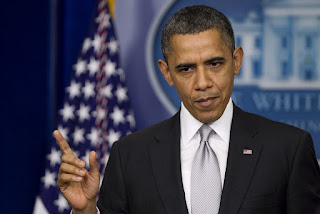 Posted by The Splendid Spitter at 8:45 PM No comments: