It wasn't a vast right-wing conspiracy

It wasn't a vast right-wing or media conspiracy that caused:
A comparison of the margins between Obama and Trump (in 2012) and between Clinton and Trump (in 2016) in the most populated counties in the states that went from Blue to Red shows and in certain nearby counties shows that the only state that could have stayed blue had her margins in each state's selected counties been as large as Obama's was Michigan. In four of the six states, her margin was smaller than Obama's but the difference was dwarfed by the margin by which Trump beat her.

(I am not using any suburban counties around Miami or Des Moines because the usual model of urban city surrounded by suburban counties is not applicable in those states. Adding Broward County or substituting it for Miami-Dade does not materially change the analysis.)

The data show that even if Wayne and surrounding counties had turned out for Clinton the way thy did for Obama, that would have led to a change of only 16 electoral votes, not enough to give the election to her. 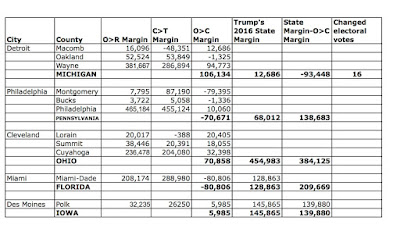 This disproves the notion, which we may well hear, that a relatively low turnout of Democrats' core constituencies of African-Americans, Hispanics living in big cities and people living in adjacent suburban counties cost Hillary Clinton the election. It was the white non-Hispanic vote in smaller cities and towns that killed her chances.

Can we blame all of whites' votes on racism? or sexism? or the media?

Isn't it as likely that an appreciable number of potential Democratic voters were turned off by the tone-deaf attitude of the Clintons, particularly Hillary--we're entitled, and I didn't break the law, and I really will stand up to the banks because, well, I worked for the Children's Defense Fund in the '70s--and either didn't vote, voted for Johnson, or, would you believe it, voted for Trump?

The Clintons are a spent force. They have done some good for this country, but the times have finally passed them by. I am sick and tired of hoping that the messes she and he have created can be cleaned up without causing mortal damage to the people who are most vulnerable to the effects of GOP right-wing principles. I am resentful that their reign over the Democratic Party has produced such a miserably inadequate bench that the only politician who saw her weaknesses--and was willing to try to capitalize on them--in 2015 was an aged hipster Senator with no record and no credibility as a potential President who wasn't even a Democrat. It is undoubtedly the Clinton political fund raising machine in each state that was deaf and blind to Hillary Clinton's weaknesses. And the press, especially The New York Times in 2015, also paid no attention to those weaknesses, even though, on the same newspaper, Times reporters continued to dig deep for Clintonisms, as well they should have. This one is on the Democratic political class and pro-Clinton media types--you can't blame Hillary Clinton for running.

I am a loyal Democrat who gave to Democratic candidates and worked the polls for Hillary Clinton, I hope they will leave politics, retire to their riches and their family get-togethers, and, if they want, they can speak to as many bankers who will pay them to pander to them.

See, there is a ray of hope amidst the devastation of November 8, 2016.
Posted by The Splendid Spitter at 11:51 AM