The Mighty Pete Strikes Out

Every once in a while, a sports commissioner actually gets things right. 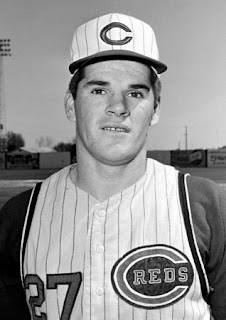 Pete Rose as a young phenom.
And he was a phenom.

As a baseball fan and as a lawyer, I thought the decision was correct.

In 1989, Pete Rose, indisputably one of the greatest hitters of all time, was permanently barred from baseball by then Baseball Commissioner A. Bartlett Giamatti. A report conducted by attorney John Dowd concluded that Rose had bet on Cincinnati Reds games in 1985 and 1986, when he was the player-manager of the Reds, and in 1987, when he was the manager of the Reds. Rose initially denied that he bet, but admitted having done so in his 2004 autobiography. Commissioner Giamatti and Rose agreed to a resolution without any finding on whether Rose had bet on baseball, and without Rose's admitting or denying that he bet on baseball. Rose "acknowledged that the Commissioner has a factual basis to impose the penalty. The penalty? "Peter Edward Rose is hereby declared permanently ineligible in accordance with Major League Rule 21." (The "without admitting or denying" formulation was borrowed from the SEC's much-discussed policy of settling cases with defendants without their admitting or denying the violations alleged.)


Major League Rule 21(d) states: "(d) Any player, umpire, or club or league official or employee, who shall bet any sum whatsoever upon any baseball game in connection with which the bettor has a duty to perform shall be declared permanently ineligible."

In one portion of his decision, Commissioner Manfred framed the issue as follows: "in considering Mr. Rose's application for reinstatement, I, as Commissioner of Baseball, must determine the risk that Mr. Rose will commit a violation of MLB's rules (most significantly Rule 21) following his reinstatement that may impact the integrity of the game." Elsewhere, Manfred said that "[i]n order to be satisfied that the policy underlying Rule 21 is not undermined by the granting of an application for reinstatement, I believe that, at a minimum, there must be objective evidence which demonstrates that the applicant has fundamentally changed his life and that, based on such changes, the applicant does not pose a risk for violating Rule 21 in the future."

The Commissioner cited a number of facts beyond those in the Dowd Report, including newly available evidence showing that Rose bet on games in 1986 and Rose's admission at his meeting with Manfred that he had  bet on Reds' games in 1987 and that he still bet on baseball today. The Commissioner found that Rose's "public and private comments . . . provide me with little confidence that he has a mature understanding of his wrongful conduct, that he has accepted full responsibility for it, or that he understands the damage he has caused."

The Commissioner's conclusion summed up his reasoning:


In short, Mr. Rose has not presented credible evidence of a reconfigured life either by an honest acceptance by him of his wrongdoing, so clearly established by the Dowd Report, or by a rigorous, self aware and sustained program of avoidance by him of all the circumstances that led to his permanent
ineligibility in 1989. Absent such credible evidence, allowing him to work in the game presents an unacceptable risk of a future violation by him of Rule 21, and thus to the integrity of our sport. I, therefore, must reject Mr. Rose's application for reinstatement.

Here's why I thought this decision was correct:

1. The issue is not whether Rose was a great hitter, deserving of first-ballot entry to the Hall of Fame, which, absent his transgressions, would seem to be automatic. Indeed, Manfred was careful to say that he had no authority over whether Rose was eligible for entry to the Hall. (The Hall would have to change its rules, however, since presently anyone on MLB's "ineligible" list is ineligible for admission to the Hall.) The issue is whether there is a reasonable risk that Rose will violate Rule 21 if he is readmitted to MLB and is employed by a team. (In the securities laws, the issue of whether to grant an injunction against future violations of the law is determined by the court's judgment as to whether, given the attendant circumstances, there is a "reasonable likelihood of future violations.")

3. Rose is and always has been a serial liar. He lied in 1989 when he denied he had bet. He lied on his taxes and went to prison. He even appears to have lied when he met with Commissioner Manfred concerning his request for reinstatement. This means that he simply cannot be trusted.

4. Rose admitted to the Commissioner that he still bets on baseball. That it is legal in Nevada, where he lives--it being assumed that he bets at legal gambling venues--does not mean that it is not a violation of Rule 21, if he were employed by any team. While it is hard to see how a 74-year-old baseball executive could influence the result of a game, and while Rue 21 the rule is not a model of clarity, the rule covers club and legal officials and club employees, some of whose responsibilities do not necessarily relate to a specific game, so I assume that a fair reading of Rule 21 would be that if a front-office executive or advisor bets on baseball, it's a violation.

Finally, Commissioner Manfred stated that, "[as I understand it, Mr. Rose has never seriously sought treatment for either of the two medical conditions described so prominently in his 2004 book and in Dr. Fong's report." (A report was submitted to the Commissioner by Rose's lawyers from  Dr. Timothy Fong, the Co-Director, UCLA Gambling Studies Program and Director, UCLA Addiction Psychiatry Fellowship. Manfred declined to discuss its substance for confidentiality reasons but said he"gave the report little weight because the factual background recited in it is inconsistent with what Mr. Rose told me during our meeting.") In my view, whether Rose sought treatment for what is apparently a psychological addiction to gambling is interesting but relatively far afield from the issue before the Commissioner.

Posted by The Splendid Spitter at 11:05 AM